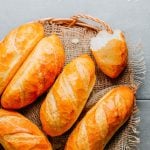 My quest to making authentic Bánh Mì is finally over! After so many trials I lost count, I'm super excited to finally share the recipe to make these super light Vietnamese baguettes! Let's bake!

WHAT IS BÁNH MÌ

Bánh Mì is a Vietnamese bread that appeared during the French colonization, around 1880. French colonists brought bread as well as paté, coffee, crème caramel, yogurt, and more, influencing Vietnamese cuisine. Vietnamese tweaked the bread by filling it with paté, carrot and radish pickles, fresh herbs, and all sorts of meat. It is now considered one of the best sandwich in the world.

Bánh Mì, that translates to "wheat cake", is the name of the bread itself, but also the filled sandwich.

So, what's so special about bánh mì? The uniqueness of this bread is that it is extremely light. The inside is so airy it almost looks like candy floss, and the crust is super thin and crispy with visible cracks on it. Another difference is that, as opposed to other breads, this one tends to become soft and chewy the next day, it doesn't really dry out.

To me, preparing a Bánh Mì sandwich starts with the perfect bread, French baguette just doesn't compare. Traditional French baguettes have a much thicker crust and more crumb, so the weight to volume ratio is much higher. Bánh Mì is lighter (less crumb), making it easier to digest, and perfect to add a ton of fillings!

HOW TO MAKE BÁNH MÌ

I tried many recipes and I could not find a single one that gave a real bánh mì texture. Most so-called Vietnamese baguette recipes yield nice results but far from the ones I tried and loved in Việt Nam. After a lot of research, insane amount of trials, and invaluable help from Vietnamese friends, I finally nailed it! If you are looking for an authentic bánh mì that is as light as a feather, this recipe surely won't disappoint.

What is the secret to getting this extremely light texture and thin crust? Well, there is not a single answer to that, it’s the combination of multiple things:

Do not omit or substitute any ingredient if you want the best results. And no, this recipe cannot be made gluten-free, sorry.

Quick note: Bánh mì dough doesn't contain any rice flour nowadays, unfortunately there is a lot of misinformation about that (Wikipedia included). IT IS NOT the secret to its light texture, neither is the shaping/rolling of the dough. It's all about what is listed above.

Before starting, you will need a few essential tools:

Alright, let's start! First, we add all the ingredients to the bowl of a stand mixer: bread flour, salt, sugar, bread improver, vitamin C, dry yeast, and water. Then knead on the highest speed for 7-8 minutes.

Once the dough his silky smooth and sticky, transfer to a greased surface and let it rest covered for about 20 minutes. Then, divide it into either six pieces of about 70g each or five pieces of 84g. I went with 70g as this seems to be the norm for most bánh mì in Việt Nam.

It's now time to shape the baguettes!

For the shaping, I would recommend checking some videos like this one to get an idea of how to do it. There are different ways to shape your baguettes, you can slap the dough into a long trapeze, then fold it in half, flatten it, and then roll. Or, flatten the dough into a rectangle and then simply roll it. Don't be too hard on yourself, the shaping will not have a huge impact on the overall texture of your bread. Try to do your best though, but don't worry, it's pretty forgiving once they rise as you can see below.

Next, place your little loafs of dough on a greased baguette pan. To proof, I recommend placing your pans in an oven at about 86°F (30°C) with a baking sheet or bowl filled with warm water to keep enough humidity. I had a lot of trouble at first with the baguettes developing a crust and drying out during proofing (a dry crust stops the dough from rising more). To prevent that, you want to cover your baguettes with a wet cheese cloth. Don't use a kitchen towel as it's too heavy and could prevent the baguettes from rising well.

After 2 hours, your baguettes should have almost quadrupled in size! Time to bake!

A lot of moisture in the oven is the secret to that thin crust. Preheat your oven to 475°F (250°C) with an iron skillet in the bottom. The skillet will retain a lot of heat, so when you will open the oven to bake your baguettes, it will come back to a high temperature more quickly.

Once your oven is at the right temperature, spray the baguettes with water and score at a 45 degrees angle using an oiled razor blade. Pour boiling water into the iron skillet to create a lot of steam, add your pans to the oven, and turn off the oven fan. By baking with no fan, we keep a ton of moisture inside the oven.

Be careful, DO NOT open the door of the oven during the first 15 minutes otherwise your baguettes will slightly collapse. See, the high heat and steam inside the oven makes the bread rise, but if you open the door before the crust has set, it will simply collapse and you will loose that super airy crumb. We won't spray the baguettes with water during baking as there is already enough humidity.

After 16-18 minutes, remove your golden brown bánh mì from the oven, and let it cool. You should hear the sound of a crackling fire and see cracks appear on the crust within 5 minutes!

I'm so happy with how these turned out! The crust is so thin and crispy, and the crumb is incredibly light!

I would say the only thing I could not get perfectly right are the ears, I still need to work on my scoring skills. Other than that, these little bánh mì are so close to the real ones!

WHERE TO USE BÁNH MÌ

Bánh Mì, while served as a sandwich, is usually eaten for breakfast in Việt Nam, although you can have it anytime of the day. The vegan versions usually include vegan paté, mayo, pickles, some sort of vegan "meat", Maggi seasoning, fresh cilantro, Thai basil, and many other add-ins like peanuts, crispy shallots, etc. Here are a few recipes and ideas on where to use Bánh Mì:

I hope you will love these little baguettes! SO light and crispy!

Let me know in the comments if you try this recipe, and tag @fullofplants on Instagram if you make it! 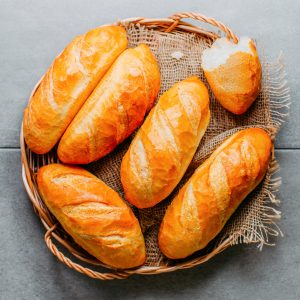 Prevent your screen from going dark

Recipe adapted from this video and this one with the help of friends for translation of ingredients and amounts. Some Vietnamese bakers add "fat powder" as well as coconut powder, which I didn't add and still got great results.

Serving: 1 baguette (about 45g)Calories: 127 kcalCarbohydrates: 23.5 gProtein: 4.3 gFat: 1.5 gFiber: 1.3 gSugar: 2.4 g
DID YOU MAKE THIS RECIPE? Tag @fullofplants on Instagram and hashtag it #fullofplants
Thanks for subscribing!