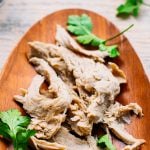 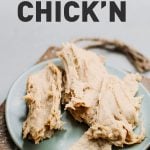 It’s finally here, vegan chicken! I have always been a fan of Tofurky but it’s quite expensive and not available everywhere, so I wanted to make my own. The result is a super tender “Chick’n” with a very meaty and fibrous texture, this vegan “chicken” will blow your mind!

Get ready for something meaty!

🍗 How to Make Vegan “Chicken”

After taking a look at the ingredients of Tofurky, I found out they were using tofu as the second ingredient. Tofu actually does a lot, it makes the seitan less chewy, more tender, and gives it a better texture overall.

The thing with seitan is that the final texture can be completely different based on how you knead it and how you cook it. For this recipe, you absolutely want to knead it for a long time to develop a fibrous texture, and then cook it wrapped in foil so it doesn’t expand or develop a spongy texture.

There are many recipes that call for chickpeas or navy beans to add tenderness to seitan, the thing is I didn’t want to add beans because I find them a bit hard to digest sometimes. So I stick to wheat gluten + tofu + seasonings + a secret ingredient to replace the beans: jackfruit! We are not using jackfruit for its texture here since it will be puréed with the other ingredients. Jackfruit adds tenderness to the seitan and makes it less chewy, which is usually a problem with seitan.

The first step is to blend the tofu with the water, jackfruit, salt, and a couple of tablespoons of oil until very smooth.

Regarding the flavorings, I didn’t use much, as I wanted the chick’n to be versatile. While I personally prefer to flavor the ckick’n with a marinade afterwards, you could definitely add poultry seasoning or your favorite spices.

Next, transfer the wet mixture to a stand mixer and add the vital wheat gluten. You want to knead the seitan for at least 20 minutes for it to develop a fibrous texture. If you don’t knead enough, the seitan won’t have that meaty texture. I highly recommend using a stand mixer, do not use a food processor, please! I broke the blade of mine when testing this recipe. The dough is very elastic so it won’t work well in a food processor.

Once your dough has developed a nice texture, it’s time to cook it. I’m sharing two ways to do so: in a pressure cooker or in the Instant Pot. You wrap the dough in two sheets of aluminum foil and pressure cook for about 30 minutes.

When your seitan is cooked, let it cool completely before shredding it, or cutting into the desired shape.

I love to make shredded chick’n by simply pulling the seitan with my hands, but you can also cut it into pieces, or make “chicken breasts” if you prefer!

Look at that fibrous and meaty texture!

I highly recommend letting the seitan cool in the refrigerator for at least 4 hours before using as it will get a better texture.

At this point the chicken is not flavored, so you will need to add flavor with a marinade. I’m sharing 6 marinades in the notes, but feel free to experiment!

This chick’n is super tender, very meaty and has that fibrous texture that is so similar to chicken. Thanks to the tofu and seitan, it is also very high in protein (28g per serving!).

🥪 WHERE TO USE VEGAN CHICK’N

This vegan chick’n is extremely versatile, it can be baked, sautéed, or grilled.

This chick’n would also make a great substitute to jackfruit in this Buffalo Jackfruit & Rice Bake, Jackfruit Blanquette, or these 15-Minute Thai Peanut Jackfruit Noodles!

I hope you will love this vegan chick’n! It’s SO meaty, versatile, and would even surprise meat-eaters! It’s definitely the best vegan chicken recipe!