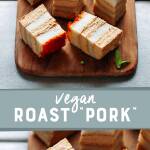 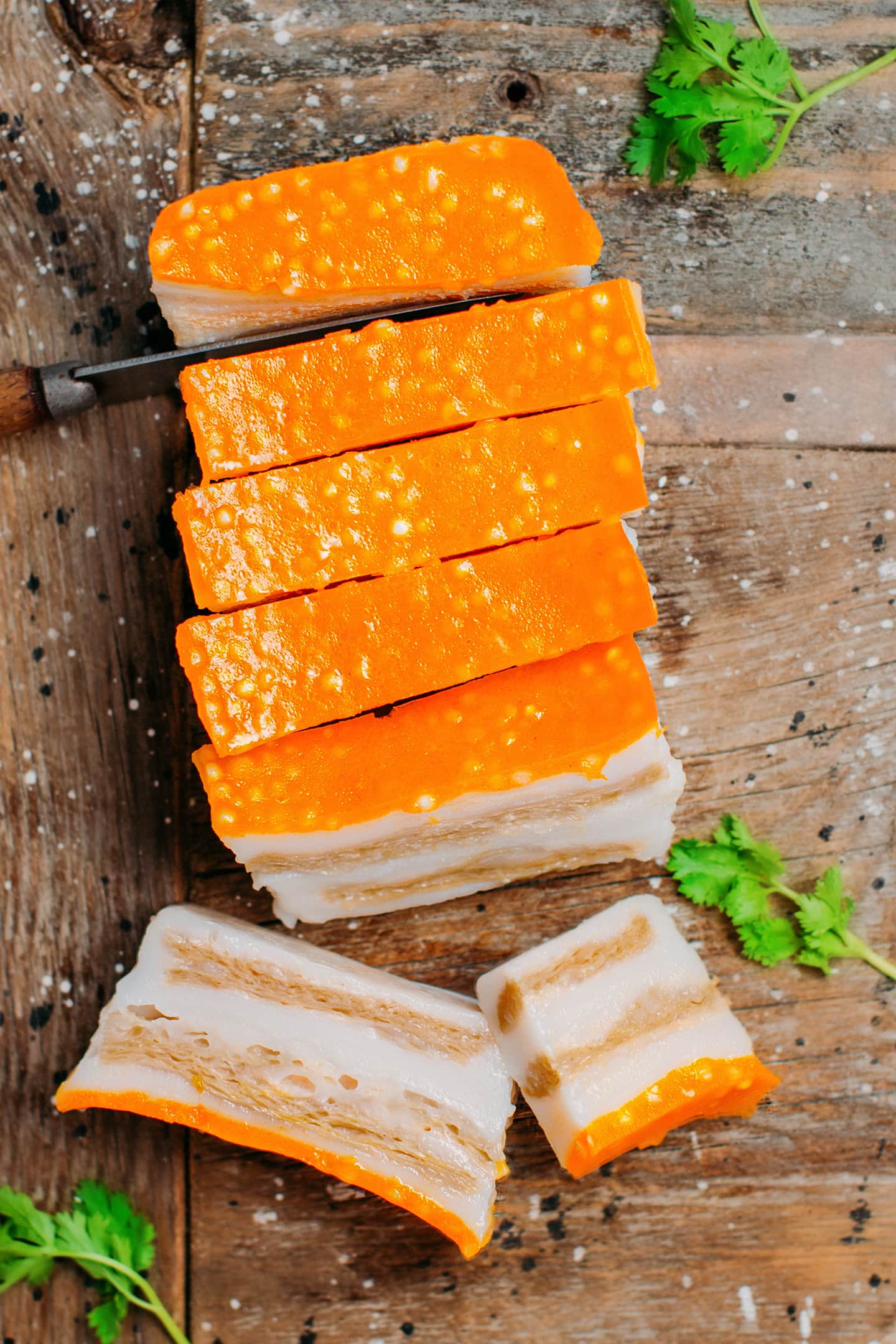 It is super meaty, with layers of fat that melt-in-your-mouth, and a thin crispy crust, you guys definitely have to try this one!

Once again, this is a dish that I discovered in Vietnam, I am blown away by how creative Vietnamese cuisine can be when it comes to making vegetarian dishes. Called "Heo quay chay" there, "heo quay" meaning pork belly and "chay" vegetarian, it consists of two layers of vegan meat and coconut "fat" topped with a crust that is made of bread! Let's take a look at how to make it! 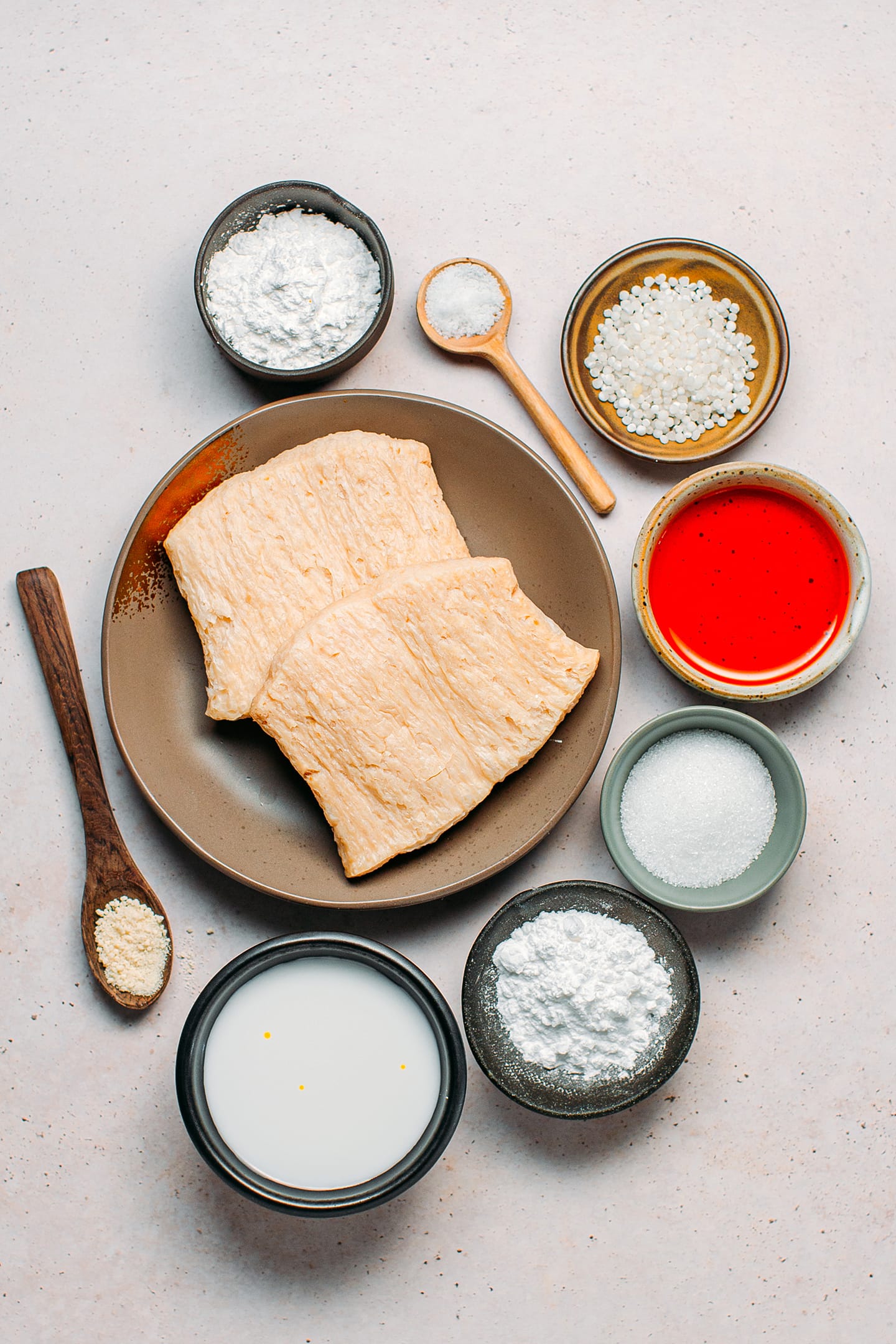 It starts with the "meat" part that consists of my Vegan Chick'n that is marinated in soy sauce, five-spice powder, pepper, maple syrup, and some fermented tofu (also called chao or fermented bean curd). If you don't have or don't want to make vegan chick'n, feel free to use store-bought one, or large textured soy protein (usually sold dried, these need to be rehydrated for about one hour).

While I haven't tried, I think this should work with tempeh slices too. I would not recommend tofu though as I doubt the coconut fat would stick to it. 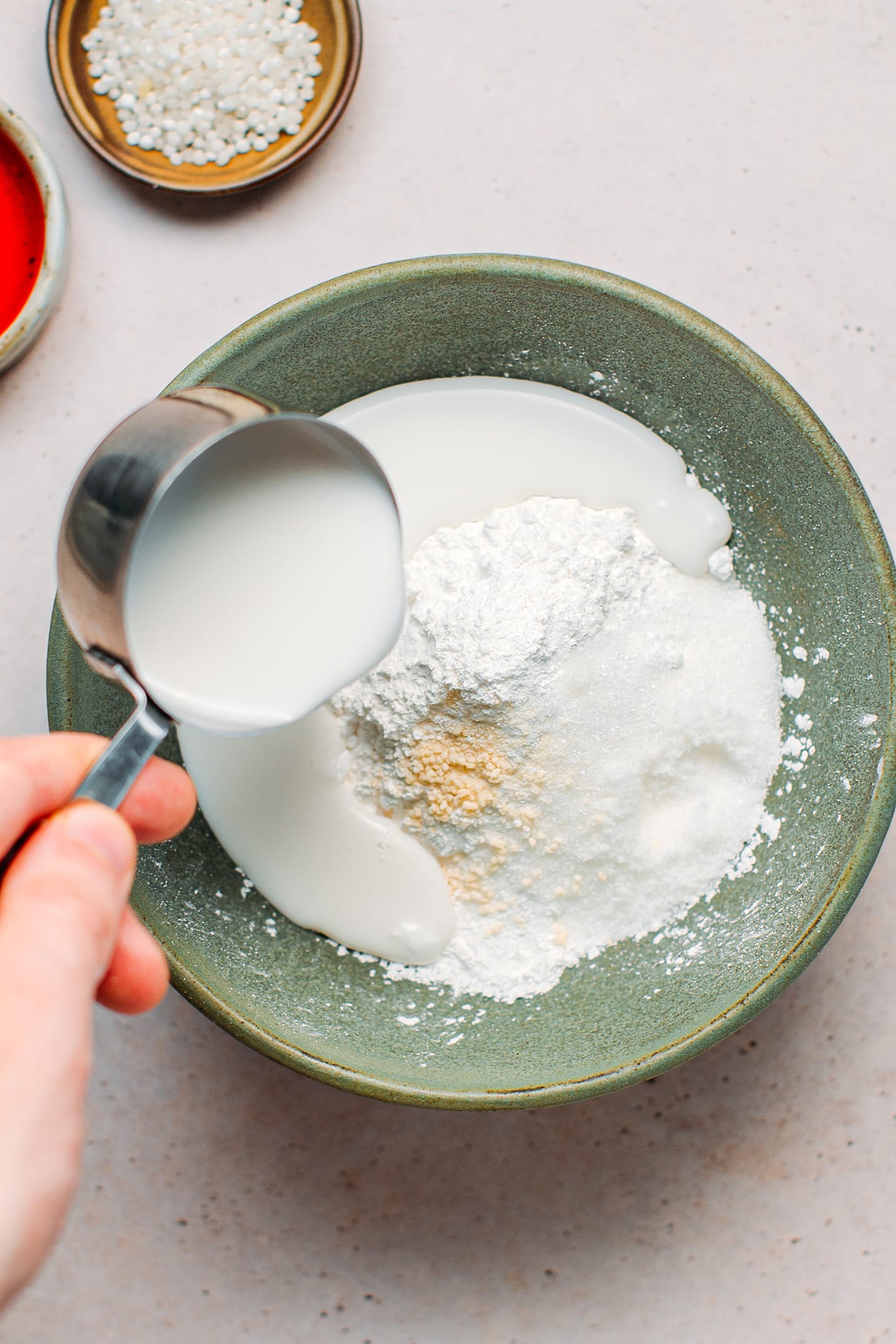 Next, we prepare the "crust". Slice a piece of bread in half lengthwise and remove as much bread crumbs as possible, leaving a thin crust. While it is usually made with Bánh mì bread, it works great with regular bread too! 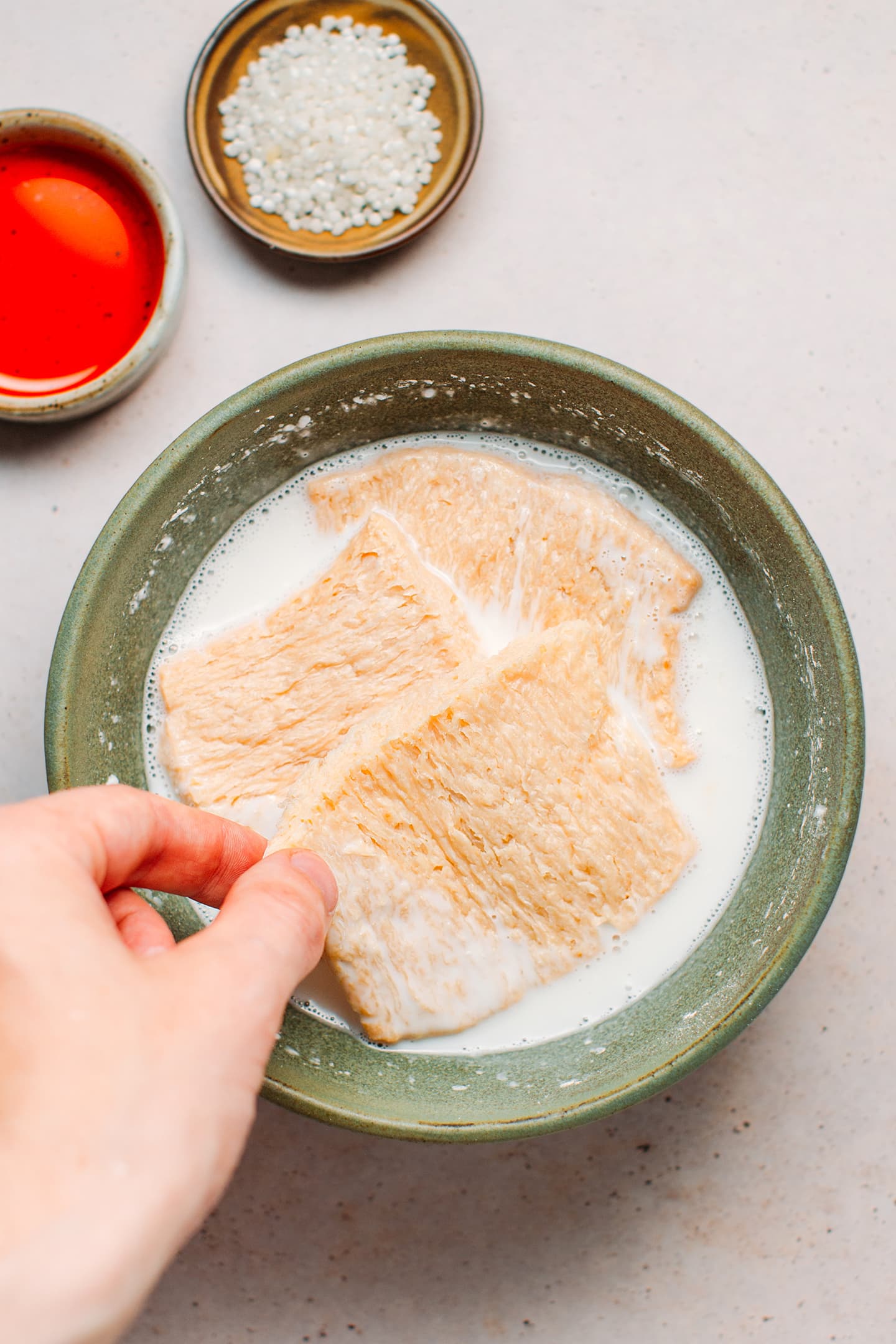 Then we have the coconut "fat" layer that not only holds everything together but also brings a meaty, fatty texture. It consists of coconut milk thickened with rice flour and tapioca starch.

You start by spreading a thick layer of coconut fat on one halve of bread, then top with a layer of vegan chick'n, and repeat once to get two layers. Quick tip: you want to remove excess marinade from the vegan meat before placing on the coconut layer otherwise it will not stick to it. 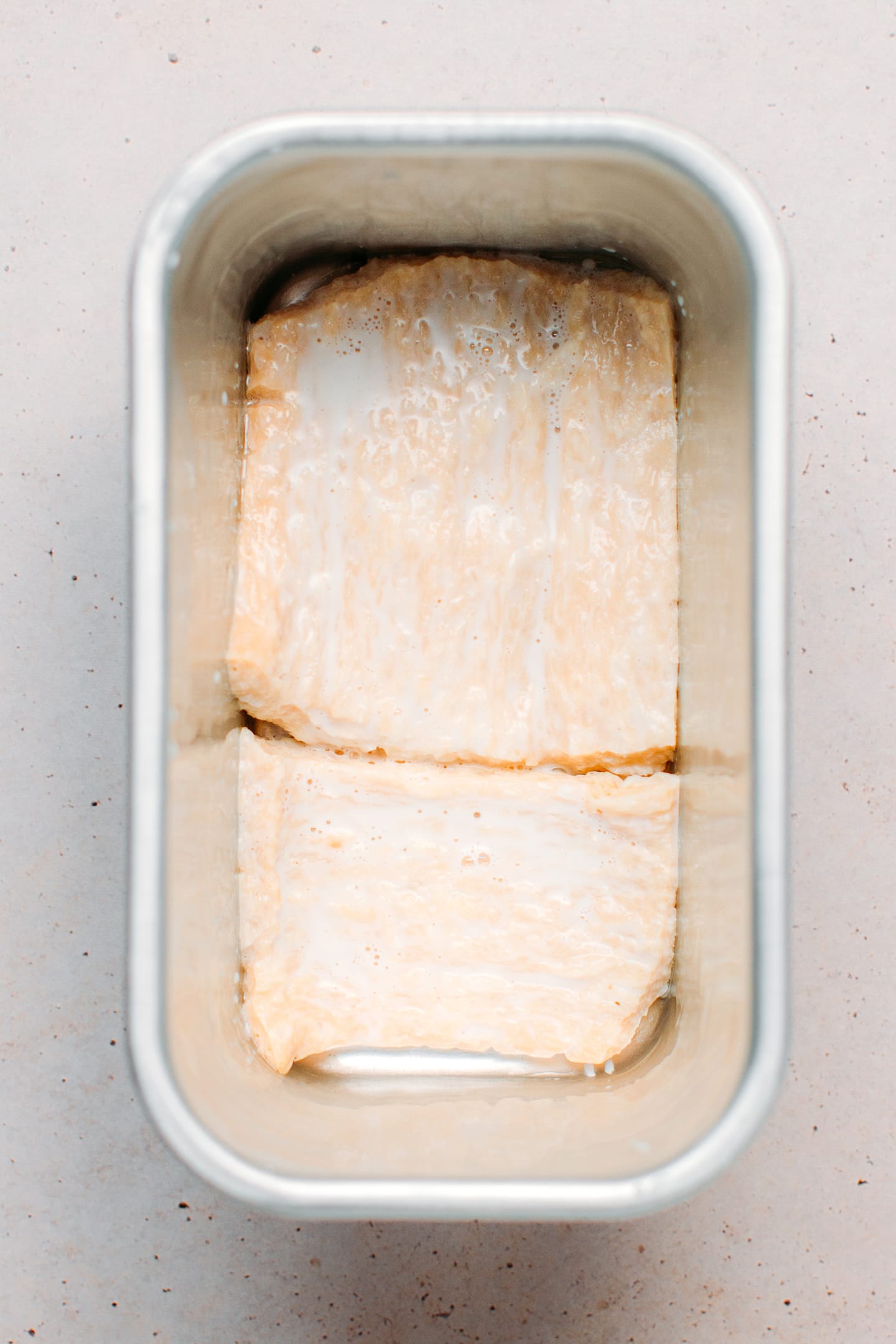 The next step is to wrap very tightly in aluminum and steam for about 30 minutes. Feel free to use a regular pressure cooker or an Instant Pot, both work.

One extra optional step is to brush the bread side with a mix of annatto oil and soy sauce to give it a more orange color. This is just for the look and won't affect the flavor or texture. 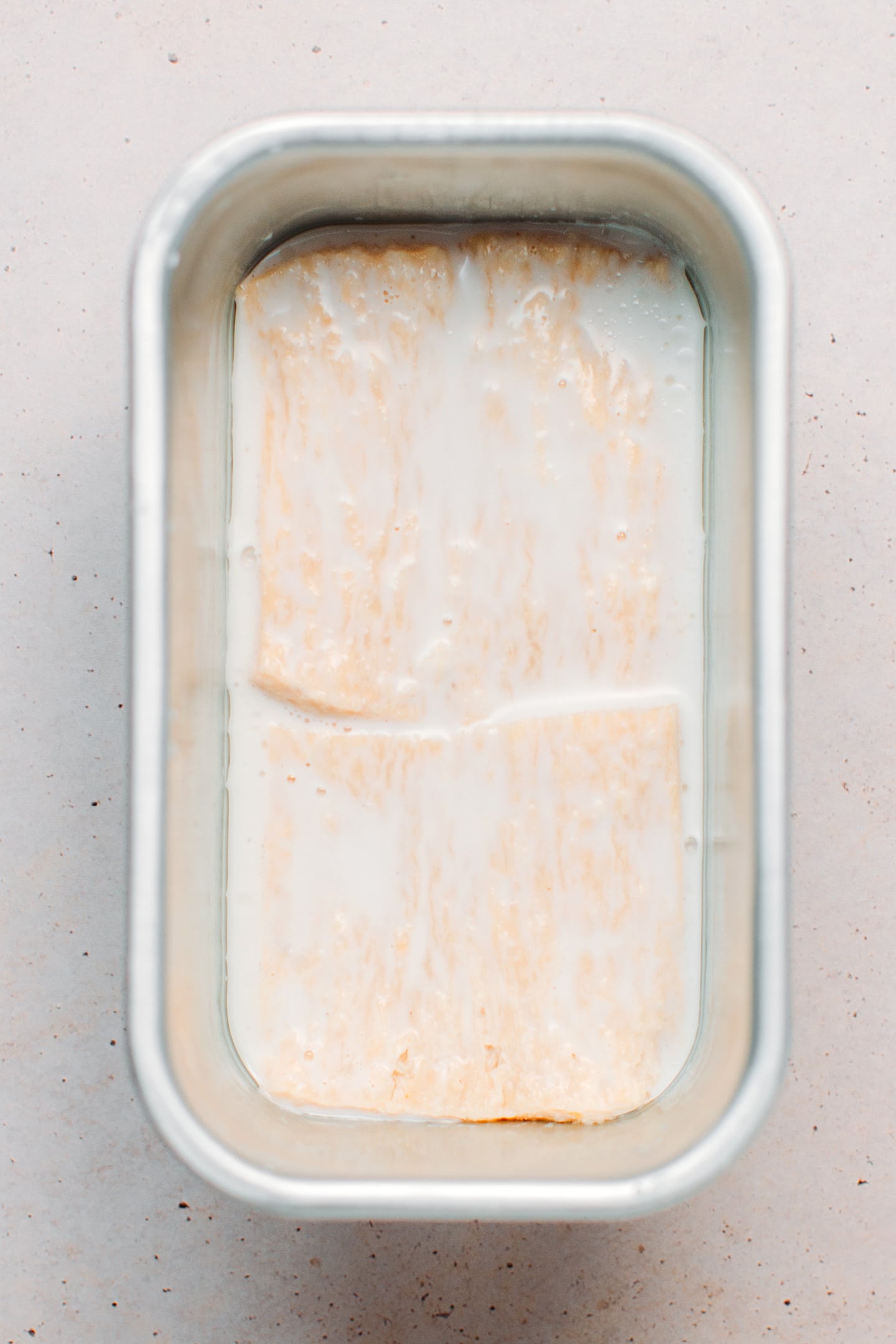 Finally, you want to fry it on the bread side until golden brown and crispy. Cut into thick squares and it's ready to eat! Serve with noodles or rice, green veggies, and your favorite dipping sauce! 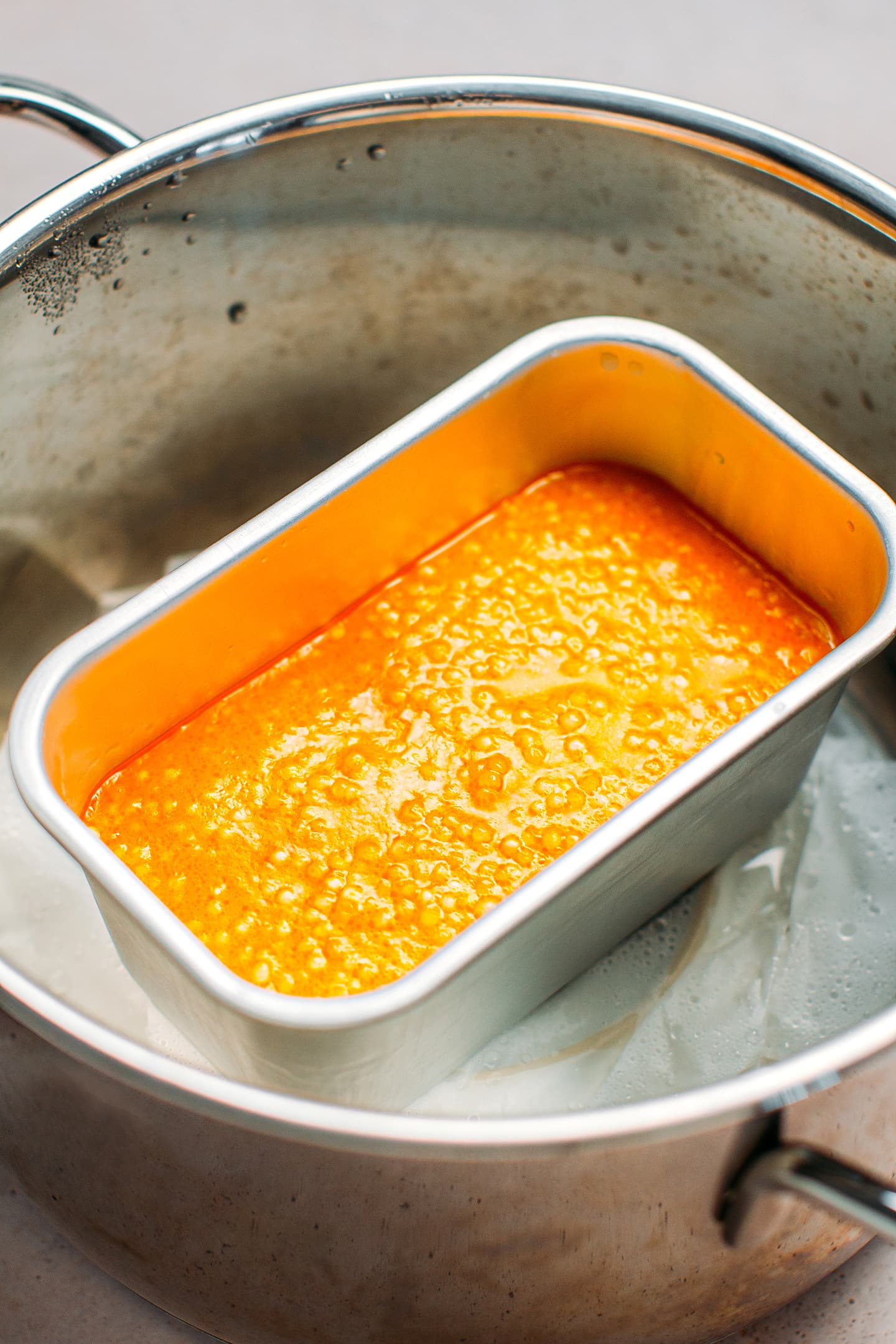 Depending on which fake meat you use, the texture will be slightly different. As an example, I used soy protein slices in the photo below, resulting in a different look and a chewier texture.

This vegan meat alternative is so good! You will be surprised by how meaty it tastes, the crust adds a nice crunch (or should I say crisp!), and the fat layer brings richness. 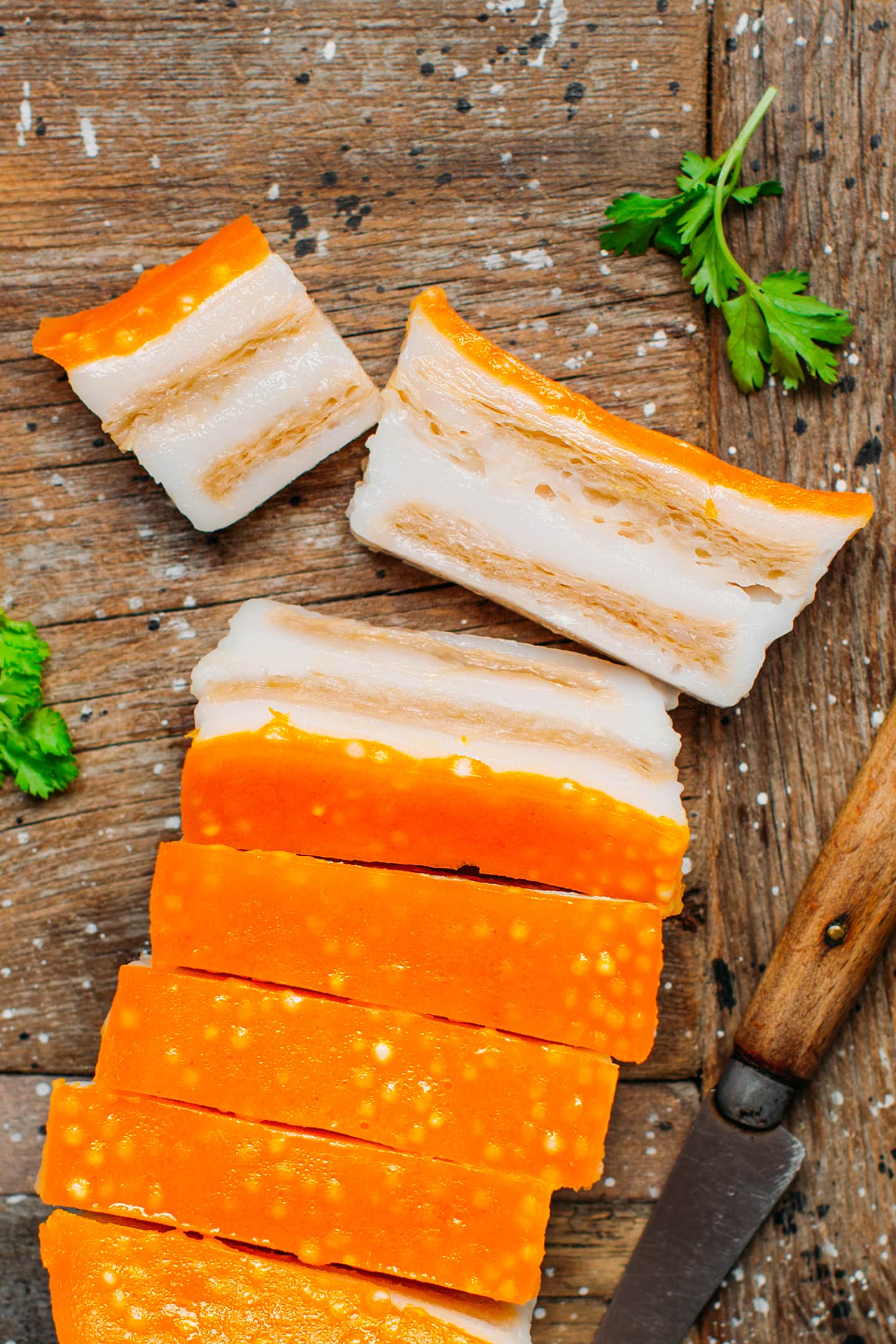 Author: Thomas
Learn how to make vegan "Roast Pork" that is crispy on the outside, chewy on the inside and with layers of (coconut) fat. You will be surprised by how meaty and real it looks and tastes!
4.72 from 7 votes
Print Recipe Pin Recipe
Servings 2 loaves
Prevent your screen from going dark

*If you don't have vegan chick'n, you can use store-bought vegan steaks (make sure they are thin), or use tempeh slices. *I recommend getting a light bread with a thin crust. Fresh bread is recommend as it will be easier to remove the bread crumbs. No nutrition information for this recipe as it can differ depending on ingredients used.
DID YOU MAKE THIS RECIPE? Tag @fullofplants on Instagram and hashtag it #fullofplants
Thanks for subscribing!