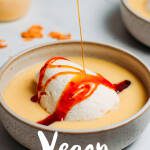 Have you ever heard of îles flottantes?

This delicious dessert consists of a light meringue floating on a rich vanilla cream and topped with a drizzle of salted caramel!

I'm super excited to finally release this recipe! It's AH-mazing tastewise, dairy-free, and egg-free! Definitely a dessert like no other!

WHAT IS AN ILE FLOTTANTE

Île Flottante, also called "Oeufs à la neige" (Eggs in snow) is probably one of the most popular French desserts!

This dessert is quite simple and consists of a rich vanilla-infused cream topped with whipped egg whites and drizzled with a salty caramel sauce. The whipped egg whites float on top of the vanilla cream, hence the name "Île Flottante", which translates to floating island. It's a light, airy, and not overly sweet dessert.

While not mandatory, îles flottantes are also often topped with toasted slivered almonds. With that being said, let's make a vegan version!

HOW TO MAKE AN ILE FLOTTANTE

Perfecting this recipe took a while but the results are definitely worth it! The whole recipe is easy and requires basic ingredients. There are 3 different preparations, each one can be made one day ahead with no issue.

It starts with the vanilla cream that is prepared with plant-based milk, vanilla, maple syrup (or agave), and cornstarch to thicken it just slightly. This dessert is served cold, that's why you want to refrigerate the vanilla cream for at least 6 hours before serving.

Sugar is heated until it turns golden brown and then deglazed with a couple of tablespoons of water. This will create a thick caramel syrup that we will then drizzle over the whipped aquafaba.

Traditionally, the whipped egg whites are steamed or microwave until cooked but still very light. Unfortunately, this technique doesn’t work with aquafaba, it disintegrated when steamed and doesn’t firm up when baked. After several unsuccessful tests, I finally reached the perfect texture!

The secret lies in a combination of coconut cream and agar that is added to the whipped aquafaba. It helps firm up the aquafaba just enough and yields the perfect texture (and yes, it floats)! The result is incredibly close to the real thing!

Once combined, transfer to ramekins or a larger bowl and let it set in the refrigetator. Magic! We have slightly firm but still super light iles flottantes!

Note: in the video, the agar coconut cream liquid is folded into the aquafaba using a spatula. I actually recommend whipping with the stand mixer for 10-15 seconds instead, for a better and more even result.

Can you make this dessert refined sugar-free? The short answer is yes. You could use either coconut sugar or maple syrup to sweeten the whipped aquafaba, the only issue is that it will change a little bit the flavor and the color. You won't get a perfectly white "island".

Regarding the caramel, it's also possible to make it refined sugar-free using a combination of maple syrup and coconut sugar. You can check out how to make vegan caramel in this Vegan Creme Caramel recipe. Another alternative for the caramel is to use coconut syrup, the taste will be different but it's still delicious!

To dress this dessert, divide the vanilla cream between serving bowls, add scooped aquafaba, drizzle with the caramel syrup, and top with toasted slivered almonds!

It is light, sweet and salty, and the combination of caramel and vanilla? Dreamy!

I hope you will love this French-inspired dessert! It's very unique and surprisingly close to the authentic version! The balance of the smooth vanilla cream with the airy aquafaba and the salty caramel it just magical! 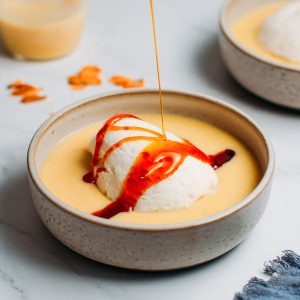