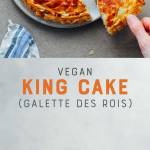 It was about time that I shared my take on this French pastry called Galette des Rois!

If you have never heard of it, "Galette des Rois" is a traditional pastry popular in France during the month of January for the Epiphany. It consists of two layers of flaky puff pastry filled with a sweet almond filling. It's buttery, rich, and delicious!

A "Galette des Rois" usually contains a "fève" which is a small ceramic figurine that is hidden in the filling. The one who finds it becomes the king, or queen for the day!

Almond flour makes the base of the filling. Then we have coconut sugar, vegan butter, almond milk, applesauce, and cornstarch to help it thicken slightly. Since we are using coconut sugar instead of white sugar, the filling will be darker than in an authentic "galette des Rois". It doesn't compromise on flavor though.

To get that authentic flavor that makes Galette des Rois so addictive, we add almond and vanilla extracts. I know some people like to add a tablespoon of rum in the filling, I didn't do it here but if that is your thing feel free to do so!

Once your filling is ready, it's time to assemble your galette. Place a disc of vegan puff pastry on a baking sheet lined with parchment paper, and then spread your almond filling on top, leaving about one inch on the sides. I chose to make the filling thick because it's just the best part of a galette des Rois!

Place the second disc of pastry on top and press down using your thumb to seal the edges. At this point, you can use a knife to flute the edges as shown above.

Now, brush your galette with a mix of maple syrup and almond milk, this will give it a nice golden color during baking. For the decoration, you can be creative and score a geometrical pattern, or draw round lines as I did there.

You want to make a hole in the middle and poke the top of the puff pastry a few times to prevent it from rising too much. If you don't do it your galette will have a lot of air on the inside, not something you want. Plus the filling could escape from the sides, so make sure to poke holes!

Before baking, I recommend you refrigerate it for 30 minutes. The galette will rise more evenly and look better.

30-35 minutes in the oven and your Galette des Rois is ready!

This Galette can be served warm, or at room temperature. It is usually served with a glass of cider as a dessert or an afternoon snack. There is a tradition that says the youngest person needs to hide under the table and tells whoever is cutting the galette who gets which slice. This way he can't see which slice has the fève so he is not biased!

This Galette des Rois is a real treat, it's rich, buttery, and easy to make. Now, who will be the King/Queen!? 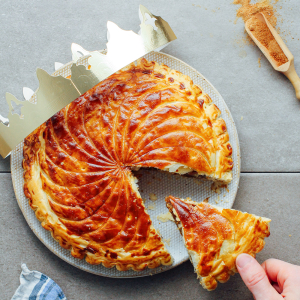