Many of you have been asking for it and I had yet to release a recipe for homemade chocolate. This 6-ingredient raw chocolate is naturally sweetened, not too chocolatey and can be kept at room temperature!

I love dark chocolate, but I have to admit sometimes I want something less chocolatey, like milk chocolate. The thing is, vegan "mylk" chocolate costs an arm at the store and is usually too sweet for my taste and/or contains refined sugars. So let's make healthy "milk" chocolate!

I tried many vegan chocolate recipes in the past and have never been satisfied with the results. Most of them have to be kept them in the fridge as they are too soft at room temperature and are often grainy with a coconut aftertaste. Definitely not something I wanted!

So I took a look at the ingredients used in commercial raw chocolates and started testing. My first tries were not a success as the chocolate was soft, melting in the hands and had crispy bits of coconut sugar.

Several batches later, I found out the solution was to first grind the coconut sugar into a fine powder, and temper the chocolate so it snaps when you break it.

Liquid sweeteners like agave, maple, or coconut nectar prevent the chocolate from tempering properly, meaning it becomes very soft at room temperature. We don't want that, that why I went with coconut sugar. The problem with dry sweeteners is that they tend to make homemade chocolate grainy unless you have a stone grinder (which I'm considering buying to make silky smooth nut butter and chocolate). So to fix this problem, we first grind coconut sugar in a blender until it has a texture similar to powdered sugar. It's not as smooth as commercial chocolate but it's still quite smooth!

Once you have superfine coconut sugar, combine it with raw cocoa powder, salt, and seeds from a vanilla bean. I also like to add half a teaspoon of lucuma as it gives the chocolate a subtle caramel flavor and more sweetness.

Next, you melt the cocoa butter and cocoa paste over a double boiler until just melted. Pour into the blender, and blend! Your chocolate is almost ready, the final step is to temper it by respecting different temperatures.

To resume, making mylk chocolate is done in 4 steps:

Cost wise, it's a lot cheaper to make your own! Even if the ingredients can seem expensive at first, I made a quick calculation and it comes down to about $1.8 per bar as opposed to the $5 I used to pay at the store (for 3.5 ounces)! Hey, every penny counts!

Regarding the flavor, it doesn't have the same milk flavor as real milk chocolate but it comes quite close, plus it's a great alternative for those who don't like dark chocolate.

What's great is that you can then tweak this recipe to your liking! Personally, I don't like too much sweetness, but if you have a sweet tooth simply add more coconut sugar. If you want it more chocolatey add more cocoa powder and cacao paste. Just remember to not skip the tempering process as it's key to get the right texture. 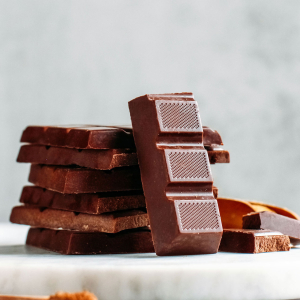 I found that lucuma adds another layer of flavor, giving the chocolate a bit more sweetness and caramel undertones. Plus lucuma is a superfood that is loaded with vitamins. It's totally optional though and the chocolate will still taste great without it. For different flavors, feel free to add your favorite superfood powder like maca, baobab, or mesquite. For a stronger chocolate flavor, use 2 ounces (60g) of cocoa powder and 1.4 ounces (40g) cacao paste.

Serving: 4 squares (15g)Calories: 89 kcalCarbohydrates: 6.4 gProtein: 1.1 gFat: 6.8 gFiber: 0.5 gSugar: 3 g
DID YOU MAKE THIS RECIPE? Tag @fullofplants on Instagram and hashtag it #fullofplants
Thanks for subscribing!