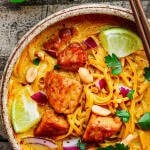 Khao Soi is a spicy Thai coconut curry soup served with noodles and usually chicken, which we will replace with tempeh for a plant-based version! It's super creamy thanks to the coconut milk, aromatic, and so easy to make!

📘 What is Khao Soi

Khao Soi is a popular Northern Thai noodle soup. It consists of rice or wheat noodles served in a very aromatic coconut milk broth. The broth is creamy and flavored with red curry paste, ginger, and garlic, giving it an amazing flavor.

The authentic version includes chicken as the protein of choice, and fish sauce. To keep this recipe vegan, we will replace the chicken with tempeh and the fish sauce with soy sauce.

🥣 How to Make Khao Soi

This main component of this dish is the soup. It is easy and takes less than 20 minutes to make. Here is what you will need:

Traditionally, Khao Soi also requires shrimp paste to give it more complex flavors. In place of the shrimp paste, I used a combination of seaweed and dried shiitake, it gives the soup a subtle "fish" flavor. Don't worry it's not overpowering and can be omitted.

For the optional "fish" flavor: Place the seaweed in an empty tea bag (or tea ball) and simmer with the coconut milk, vegetable broth, and red curry paste for a good 10 minutes. Once the soup is done, just remove the tea bag! By using a tea bag you don't have to strain the soup, less mess.

If you are looking for a rich and aromatic noodle soup, you are going to love this vegan Khao Soi recipe! While this dish is a bit higher in fat than usual, it's so delicious you definitely won't feel guilty about it! 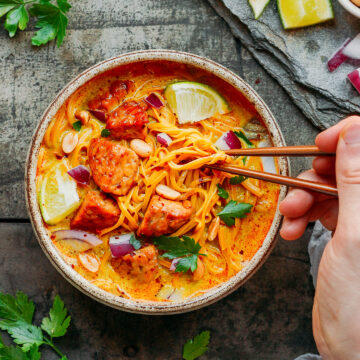 If you have leftovers: do not combine the noodles and soup in the same container/bowl, the noodles would become too soft and will break. Keep the two separated. To reheat: Bring a large pot of water to a boil, remove from heat and add the cooked pasta, let sit for 2-3 minutes just to warm and drain. In the meantime, reheat the soup in a saucepan over medium heat. Nutrition information is calculated with full-fat coconut milk, it is slightly higher in calories but more creamy. If you want to make it fancier, you can also fry some of the noodles in a medium saucepan filled with oil for 1-2 minutes until crisp. Then use the fried noodles as a topping.

Serving: 1 servingCalories: 357 kcalCarbohydrates: 23.8 gProtein: 10.4 gFat: 26.4 gFiber: 0.5 gSugar: 6 g
DID YOU MAKE THIS RECIPE? Tag @fullofplants on Instagram and hashtag it #fullofplants
Thanks for subscribing!