Jump to RecipePrintComments
5 from 7 votes

As we are slowly approaching the Holiday season I'm starting to think about festive dishes to serve on the Christmas table.

This vegan Wellington will definitely be the centerpiece! It consists of a super tender and meaty seitan roast coated in a mushroom duxelles and wrapped in a flaky puff pastry. Ready?

It starts with the duxelles, which is a mix of finely chopped mushrooms, shallots, garlic, and thyme. It is sautéed in a skillet until it forms a paste that will coat the roast.

The mushroom duxelles adds a ton of flavor and really is the key to a good Wellington. Once your duxelles is ready, set aside and prepare the roast.

You guys loved my Teriyaki meatballs for their soft and meaty texture so I slightly tweaked it to make it into a large roast.

The base remains the same, we use a mix of brown rice, red kidney beans, and mushrooms that bring moisture and umami. Then for flavor, we have sautéed onions, garlic, and spices. What I did differently here is that I added some cinnamon and nutmeg for a more Christmassy flavor and a whole cooked beet that gives the roast a distinct red color. The addition of a beet also adds a natural sweetness to the roast.

To make the roast, you combine all the ingredients in the bowl of a food processor and pulse until you get a paste. Don't process too long though, you want to keep some texture. Once this is done, transfer to a large mixing bowl. At this step, you can be creative and tweak the recipe a bit by adding a handful of raisins, cranberries, pecans, or walnuts for more flavor and some crunchiness.

Then for a meaty texture, I combined the mixture with vital wheat gluten. Unlike most seitan roasts, this one is moist and tender. Gone are the dry and too chewy roasts! If you are gluten-free, I guess you could substitute the gluten for gluten-free breadcrumbs. Be aware the texture won't be as meaty though.

The next step is shaping the Wellington. Start by spreading the mushroom duxelles in the center of a vegan puff pastry. Then place the seitan roast on it and generously brush it with mustard. Mustard adds another layer of flavor that goes very well with the mushrooms.

To shape it into a nice log, I recommend using plastic wrap. Use the plastic wrap to wrap the seitan roast in the puff pastry, then pinch the ends of the pastry to seal it.

For the decoration, you can go with a classic lattice pattern or nothing at all. Personally, I added a vegan logo on the crust, at least I tried.

45 minutes in the oven and you end up with this beautiful golden brown Wellington!

This Wellington roast is perfect for the holidays, it's festive, flavorful and is even more delicious served with gravy, asparagus and mashed potatoes on the side. It's the ultimate holiday dish! 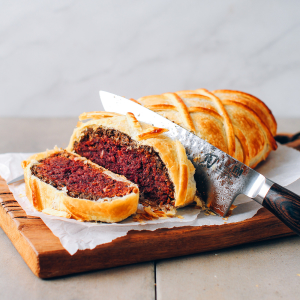 * You can use store-bought cooked beets or roast a beet yourself. To do it, wash the beet and wrap it in aluminum foil. Bake in a 400°F preheated oven for 1 to 1,5 hour, or until the beet is soft.
Course : Main Course
DID YOU MAKE THIS RECIPE? Tag @fullofplants on Instagram and hashtag it #fullofplants
Thanks for subscribing!