If there is one salad that is perfect for Fall/Winter, this is it.

If you have never heard of Chevre Chaud Salad, it's a classic French appetizer that consists of breaded fresh goat cheese served with a salad and a balsamic vinaigrette. It is served all year-round as an appetizer in restaurants but is usually preferred later in the year.

To replace the goat cheese used in the original recipe, I went with a very simple cashew cheese fermented with probiotics. The fermentation gives the cheese a flavor that cannot be replaced by simply adding lemon juice. It's tangy, cheesy, and so creamy!

It all starts with the cashews that are soaked overnight. Then, you blend them with water until you get a thick and smooth cream.

Next, it's time to add the cultures! You can use acidophilus probiotics, rejuvelac, or a pinch of mesophilic culture. If you plan on using rejuvelac, simply omit the probiotics and use rejuvelac instead of water.

Once you have a smooth cashew cream it's time to let it ferment! Simply transfer it to a bowl and cover with plastic film to touch. Then leave it at room temperature for 24-48 hours depending on the temperature of your house. You know it is ready when it has a tangy flavor.

It is the fermentation process that will give the cheese its tanginess and sharpness.

The cheese is still soft after the fermentation so I recommend you refrigerate it for at least 8 hours, it will firm up slightly once cold. Then use a cookie cutter lined with plastic film to shape the cashew cream into a round and then carefully coat it with breadcrumbs (I used panko here for extra crispiness).

I didn't deep fried the breaded cheese here, as opposed to my Vegan Fried Goat Cheese Balls recipe. Simply shallow-fry until golden brown on both side and serve immediately!

To serve, use your favorite greens and mix with the balsamic vinaigrette. Place the "chèvre chauds" on a bed of salad and top with crushed walnuts.

I like to add a drizzle of maple syrup on top of the "chèvre chauds" for a balance of sweet and salty. SO delicious!

If you are looking for a delicious and filling entrée (or appetizer), this Chèvre Chaud Salad will not disappoint! The crispy crust and the creamy inside of the vegan cheese combined with the tart vinaigrette makes this recipe a must-try! 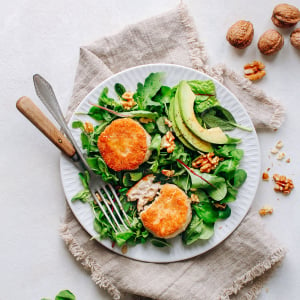 Two chèvre chauds makes a quite filling entrée. If you plan on serving these as an appetizer I would recommend making smaller ones (14 instead of 7 pieces of cheese).

Serving: 1 (2 chèvre chauds with salad)Calories: 489 kcalCarbohydrates: 28.6 gProtein: 12.1 gFat: 39.3 gFiber: 2.8 gSugar: 4.4 g
DID YOU MAKE THIS RECIPE? Tag @fullofplants on Instagram and hashtag it #fullofplants
Thanks for subscribing!