If you love pop tarts as much as you enjoy sipping on a creamy chai latte, you are going to go crazy over these homemade chai pecan pop tarts! These vegan pop tarts are nutty, spicy, infused with vanilla, and so flaky!

📘 What are Pop Tarts

Pop Tarts are thin and flaky pastries filled with a sweet filling. It is enjoyed for breakfast or as a snack.

Most commercial Pop Tarts are quite unhealthy, contain a ton of weird ingredients, and most of the time taste like cardboard. Here, we are making our own pop tarts that are naturally-sweetened, require just 6 ingredients + spices, and taste a lot better!

It starts with the pastry that must be prepared in advance as it needs to chill for a couple of hours before using.

To prepare the dough, add all-purpose flour and a pinch of salt to a mixing bowl. Then cut in cold vegan butter and mix until it forms a coarse meal. Stir in a tablespoon of very cold water (to prevent the butter from melting), and mix again until it forms a dough.

Next, wrap the dough in plastic wrap and chill in the refrigerator for at least 2 hours.

While the pastry is chilling, prepare the filling: coat pecan halves with maple syrup, a pinch of salt, and spices. To give the filling a chai flavor, we are going with ground cardamom, cinnamon, ginger, and cloves.

Next, spread the pecans on a baking sheet and roast for about 8 minutes, or until caramelized.

Once the caramelized pecans have cooled down a bit, transfer to a food processor and add the remaining ingredients: more maple syrup, coconut sugar, and vanilla extract.

Process until it forms a chunky paste. You do not want to turn it into a nut butter, so do not process for too long.

Flatten the cold dough into a thin rectangle (of about 3/32-inch thickness) and cut it into 6 even rectangles.

Place 2 teaspoons of the pecan filling on half of the rectangles of dough and cover with another rectangle of dough. Use a fork to seal and make ridged edges.

Finally, poke the pop tarts with a fork to let the steam escape and bake for 20-25 minutes, or until golden brown!

To be honest, I actually prefer these pop tarts unglazed. It really makes the pecan filling shine. If you have a sweet tooth and want prettier pop tarts, definitely go with the glaze!

If pop tarts used to be (or still are) your favorite high school snack, you are going to love these homemade chai pop tarts! It is super fun to prepare, buttery, flaky, and the chai-spiced pecan filling really take these to another level! 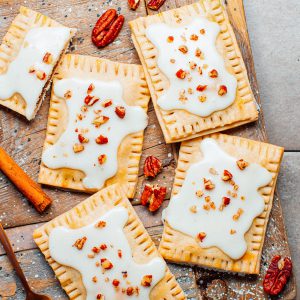