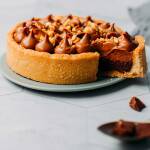 Or extreme deliciousness in tartlet form.

So, what do we have here? First, a gluten-free vanilla pastry crust, then a fudgy layer of brownie followed by a rich dark chocolate ganache, and finally, a salted caramel chocolate frosting cream. This tart is insanely good. Super chocolatey, loaded with different textures and flavors, it's the ultimate chocolate tart(let)!

Before starting, here is a little disclaimer: If you are looking for a quick dessert, you might pass this one as it requires some time to make all the different layers. Okay, with that being said, let's start!

We start by making the crust that consists of a mix of oat flour and almond flour. Coconut oil gives it a flaky texture, and maple syrup brings sweetness. If you don't want the subtle coconut flavor, use deodorized coconut oil.

Combine all the ingredients in a mixing bowl to form a dough, then press it down into small 4-inch tart rings. The dough cannot be rolled out so you will have to shape it into each ring, this is the step that will take the longest.

I made small tartlets here, but feel free to double the recipe if you want to make a large one.

Next, bake for about 15 minutes, or until golden brown!

Now onto the super fudgy brownie layer! It is based on my Extra Fudgy Vegan Brownies recipe with a few changes. Once baked into a thin layer, it is cut and placed on the bottom of the crust.

For the second layer, we have a very simple chocolate ganache that consists of almond milk and dark chocolate. Nothing complicated but it results in is a rich, creamy, and chocolatey ganache.

To finish, the coconut caramel chocolate cream! It's the icing on the cake, literally and figuratively.

To make the caramel, simmer coconut cream and coconut sugar for a few minutes, or until it has slightly reduced. Then, pour in more coconut cream and dark chocolate chunks. Both will add richness to the cream and help it firm up once cold.

This cream topping has a nice salted caramel flavor with coconut undertones, so good! A sprinkle of crushed hazelnuts (or almond, or peanuts) on top and you're ready to go!

I hope you will love these chocolate tartlets! They are super rich, chocolatey, creamy, and addicting! You will definitely not stop at one slice! 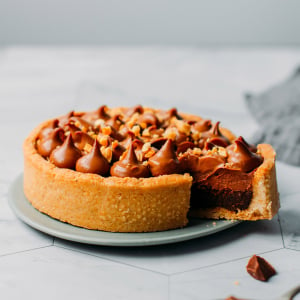