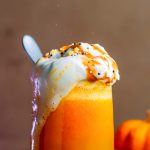 -- This recipe is part of the Harry Potter Inspired Recipes Week --

London Pumpkins & Sons, the company behind the popular Pumpkin Juice, had another drink in the works. They took their pumpkin juice to the next level by blending it with fresh ginger, and infusing it with fine bubbles. Unfortunately, London Pumpkins & Sons never officially released this beverage due to a shortage of ginger roots. Weasley brothers bought all the stock available to produce their brand new Dragon Eggs, that are in high demand since their launch. The pumpkin company decided to postpone indefinitely their new sparkling pumpkin juice to focus on their main product.

Luckily, Arthur Frosted, reporter at The Daily Prophet got its hands on the recipe and shared it in the October 18th edition. Here is the reproduction of the recipe, as shared in the newspaper.

We are almost at the end of this special Harry Potter week, meaning it's time get the drinks out! This upgraded pumpkin juice comes together very quickly. We first start by preparing a simple ginger syrup.

Cook ginger slices in maple syrup and water for a couple minutes and then let it infuse for about 30 minutes, or until it has a strong ginger flavor. We will use this syrup to sweeten our Pumpkin Fizz and give it a lemony flavor.

Once our syrup is ready, it's just a matter of combining everything together. Pour a few tablespoons of syrup into a glass, top with pumpkin juice, and finally sparkling water. Stir and serve cold! It's sparkling, gingery, and super refreshing!

Want to make your Ginger Pumpkin Fizz more fancy? What about piping some vegan aquafaba whipped cream on top, drizzling with caramel sauce, and topping with sprinkles!? Now we have the real deal!

I would say this Pumpkin Fizz is a magical combination of ginger beer with pumpkin juice, so good! And between us, much better than their original pumpkin juice!

I hope you will love this fresh pumpkin juice with a pleasant ginger kick! It's not overly sweet, just a bit spicy, and fruity! 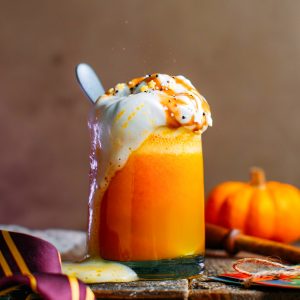 Calories don't count in the Wizarding World.
DID YOU MAKE THIS RECIPE? Tag @fullofplants on Instagram and hashtag it #fullofplants
Thanks for subscribing!