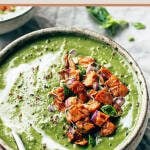 This recipe is inspired by the "tom kha gai", which is a Thai coconut soup flavored with lemongrass and galangal. Disclaimer: this is not a traditional Thai recipe, but it tastes delicious and it's loaded with greens! It has that nice balance of spicy/sweet, and comes complete with cashew butter tempeh!

Spinach is simmered in coconut milk with lemongrass, galangal, garlic, and mushrooms (not pictured, I forgot them in the photo!). Then I added a tablespoon of coconut sugar to balance with the other aromatics, and more particularly with the green chili pepper. The latter is optional and if using, make sure to remove the seeds and add only half of the chili, it will be more than enough to give the soup a nice kick.

Now onto the Galangal. It is a root that looks a bit like ginger but has a totally different flavor. You can find it in Asian markets. It's harder than ginger, meaning it can't be minced. It's usually removed from the soup after simmering but if you have a powerful blender you can leave it and blend with the rest of the ingredients.

Mushrooms take the recipe to the next level, resulting in a cheesy and earthy soup. Do not omit them!

Now here is a quick tip, if you don't have any galangal or lemongrass, you can still make this recipe! Okay, it might taste a bit different but it will do the trick: swap them for ½ teaspoon of green curry paste, and don't add the green chili otherwise it will be too spicy.

Let's face it, a soup is never complete without the toppings. Here comes the tempeh. It's marinated for at least 30 minutes in a tasty combination of soy sauce, cashew butter, maple syrup, sriracha and toasted sesame oil. Have I ever told you how much I love sesame oil? Well, if you have been following the blog for a while you probably know. I have been using sesame oil so much lately I'm starting to wonder if it doesn't have some addictive properties.

For the other toppings, I went with some sprouts, red onion, and some chanterelle mushrooms.

This creamy curried green soup is delicious on its own, or with the cashew tempeh. It would also be a great addition to brown rice, or used as a sauce for pasta! 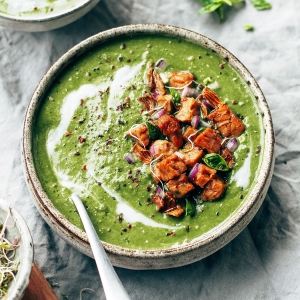 You can blend the galangal with the other ingredients if you want. Just be aware: if you don't have a powerful blender you may feel some fibers in the soup. This soup is already thick, but it might thicken a bit more in the refrigerator because of the full-fat coconut milk, this is normal and it will become thinner/creamier once reheated. If you prefer a thinner soup, add ½ cup vegetable broth when blending the soup.

Serving: 1 (with tempeh)Calories: 434 kcalCarbohydrates: 21.8 gProtein: 18.2 gFat: 32.1 gFiber: 1.7 gSugar: 8 g
DID YOU MAKE THIS RECIPE? Tag @fullofplants on Instagram and hashtag it #fullofplants
Thanks for subscribing!