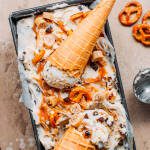 Do you also happen to get a pint of ice cream promising a ton of toppings, but ending up trying to find them with your spoon with no luck? Not going to happen here.

The base of the ice cream consists of soaked raw cashews, coconut cream, and agave (or maple) syrup. Then we add vanilla extract and blend everything until smooth.

Refrigerate for at least 6 hours so the cream is very cold before churning in an ice cream maker.

Now let’s talk about the add-ins! We have: 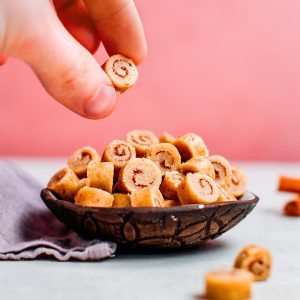 Cinnamon Bun Cookie Dough Bites
Ben & Jerry-inspired bite-size cinnamon buns! No-bake and naturally sweetened, these little bites are delicious as is, or on top of ice cream, oatmeal, or in yogurt!
Make This Recipe

Once churned, transfer the vanilla ice cream to a freezer-safe container and stir in the cinnamon buns, pretzels, chocolate chips, and cinnamon swirl!

I recommend pouring about ¼ of the vanilla ice cream into the container, then add some of the toppings, stir, and repeat until everything has been used. This way the add-ins are evenly distributed.

This ice cream is so creamy, scoopable, and you definitely won’t miss the add-ins! Enjoy this ice cream in a bowl, or with waffle cones! 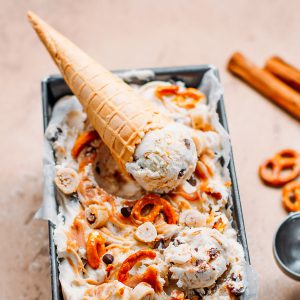